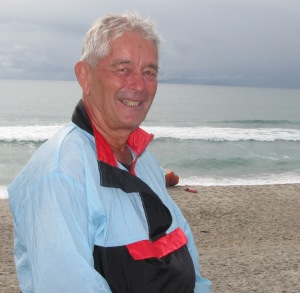 Mows the Surf club lawns for nothing, free, nada…

The guy who mows the lawns at the surf club is one of the good blokes who make Whiritoa the place it is.

His first name is Pat and its funny that his last name is “Cropp”.  He’s our lawn mower guy.

He has been mowing the surf club lawns for the last five years, all for nothing.  When he started, he had a large lawn mowing round in Whiritoa.  One day he was driving past the club and he noticed that the lawns needed mowing and took it upon himself to mow them and has done so ever since.  Now this is one heck of a good deed. What this means is that the club saves because of good people like Pat and we can spend what little money the club gets on the necessary things.

Pat Cropp is a family man, has a wife called Lyn and three grown children and 11 grandchildren.  He started his earlier life as a train driver; he did 19 years with New Zealand Railways.  He drove both diesel and steam engines and did a long seven year apprenticeship first. He reckoned he got bored with the diesel engines but with steam he was active all the time.  He said that on his first trip on steam he used seven tons of coal and that was when he was loading Phosphate at the New Plymouth port and then carted it down to Wanganui to the processing plant there.

So apart from knowing how to drive a train, he knows how to make a course look good with smooth fairways, get the greens green, get pristine bunkers and also knows a lot about grass.  He says that Kikuyu is common and dominant grass in Whiritoa, but has an interesting history as it is not a native to New Zealand.  Pat says it was bought to New Zealand by an All Black playing in South Africa in the early 1920’s.  The AB liked the colour and characteristics of the grass and bought a cutting back to NZ and now it is with us to stay whether we like it or not.  It has now spread over most of the North Island.  Pat’s story may be an urban myth or a tall story, but if you Google it, you may get to the bottom of it and would be a good talking point the next time you see him. Pat says that one thing for sure is Kikuyu is the anglicised version of the proper noun Gikuyu, the most populous ethnic group of tribe’s people in Kenya.

Enough about grass and back to Pat. He has recently retired but we can loosely use that term as he has recently become the fire chief for the local volunteer fire brigade. This means he has been busier than ever.  There has been a lot of training and preparation for the nine volunteers and they have already been called out twice this year.

Pat and his wife Lyn also travel a lot and have seen a lot of interesting places around the world. AND what does a retired train driver do when he goes on a holiday?  He goes on a 21 day rail enthusiast’s first class train trip around Europe.  They started in Berlin going 350kms per hour.  He says that you get dizzy looking down outside the train, so you have to look out.

Pat also has another love and that is his vintage 1952 BSA Golden Flash 650cc motorbike. He bought it in bits and pieces and restored it back to its former glory and has had it running since 1992, and he rides it regularly.

There is so much more to Pat but we would have to write a book.  The club has recently recognised Pat’s generosity at the prize giving at Easter when he was awarded the Appreciation Certificate.  Pat, the spotlight is on you and thank you from all of us.